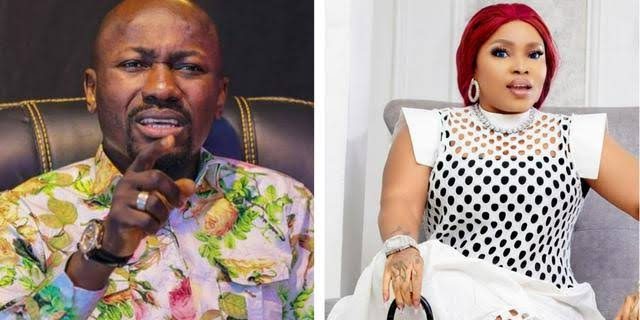 What Halima Abubakar Said As Apostle Suleman Sues Her To Court—-Halima Abubakar, a Nollywood actress, has reacted to the legal suit filed against her by Apostle Johnson Suleman.

Recall that the duo have been at loggerhead after the actress alleged that she was in a romantic relationship with the cleric.

She had admitted that she had an affair with the preacher because he told her he was divorced with three children.

Halima, who is battling an unknown ailment, also accused him of feeding bloggers negative stories about her.

Suleman, in a suit filed by his lawyer, accused Halima of defamation, blackmail and publishing demeaning statements about him.

The suit read in part, “It is our brief that you caused to be published malicious, defamatory and demeaning statements about our client in several micro-blog sites, chiefly Gistlover, and your Instagram handle Halima Abubakar, which have wider reach within Nigeria and the world.

“These statements, made by you, knowing fully well that they are false, untrue, malicious, defamatory, baseless, and a tool of blackmail of our client, impugn the reputation of our client and reduce him in the eyes of responsible and right thinking members of the society.”

Reacting on her Instagram page, Halima said she will meet him in court.