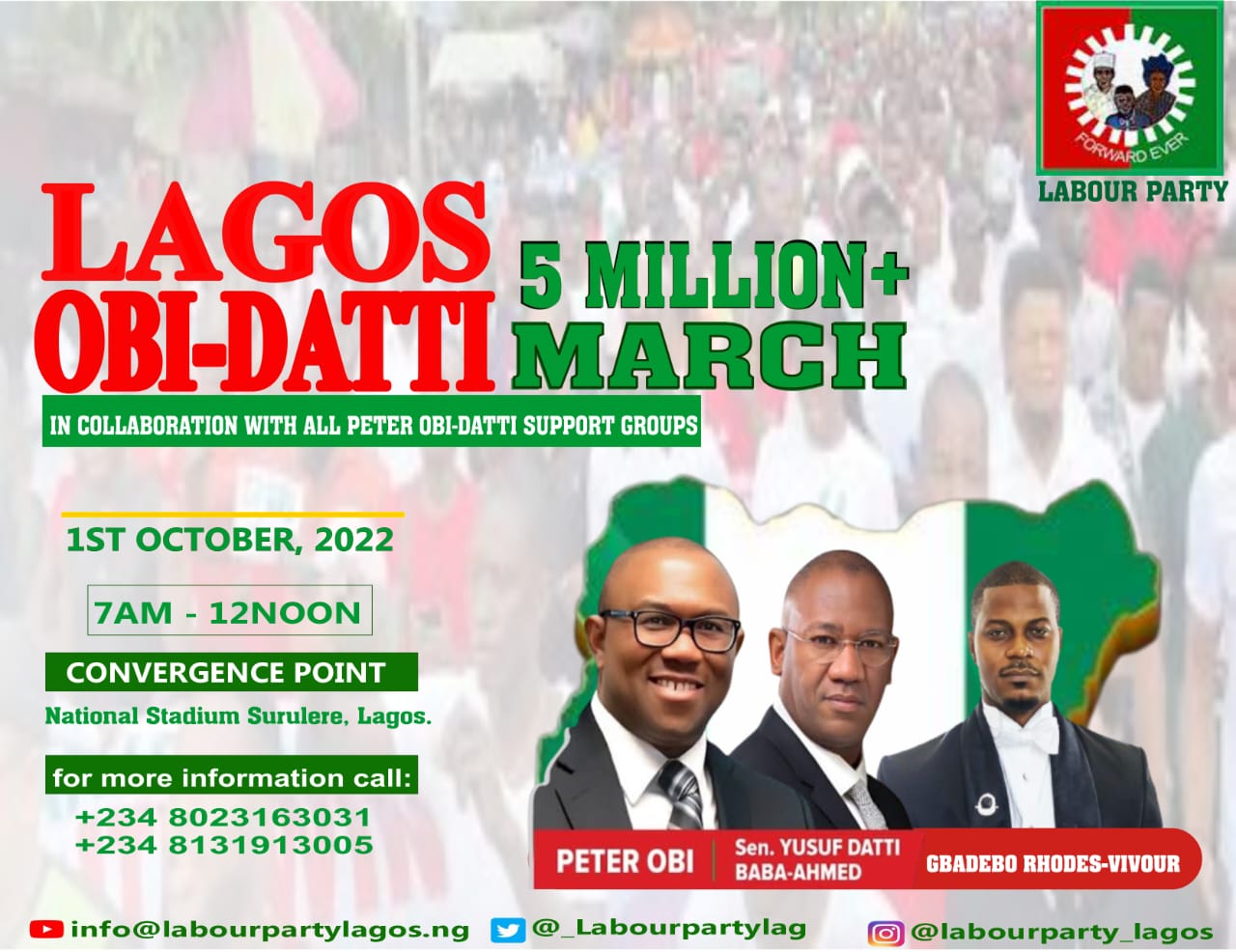 BREAKING: Peter Obi‘s Labour Party To Shutdown Lagos With 5 Million March For #PeterObiForPresident—As the reality of Peter Obi’s emergence as a strong political force and leader to reckon with in the forthcoming general election gathers momentum, the unalloyed solidarity movements and bandwagon of support-base has continued to sweep across popular cities in the country, like a tsunami, Lagos State is proving not to be left out of the quest to enthrone an ideal leadership and change of guard from the tired old warhorses to a much articulate, vibrant and visionary leader to take the country out of the doldrums of bad and stereotyped unproductive leadership that has plunged the country into untold hardship in all spheres of life.

Tagged Lagos Obi-Datti 5 Million+ freedom March, the never seen before kind of rally, is scheduled for supporters to converge at the National Stadium in Surulere by 7am to march through Maryland (Freedom Tunnel) bus stop by 12noon.

It’s no longer news that Labour Party is the much yearned third force to provide Nigerians with a unique choice from the two major political parties that have failed the country since 1999. However, like a king whose time to reign has come, Peter Obi is the anointed candidate to beat come 2023 with his huge acceptance.

Peter Obi’s strong knowledge of Nigeria’s myriad of problems and his willpower to take the challenges head-on, especially the escalating security challenges and almost comatose economy have given him an edge over other candidates.

Another high point of Peter Obi’s choice as the next Nigeria’s leader is his geo-political zone. Political observers and men of good conscience across the country, irrespective of ethnicity or religion have continued to support the emergence of a South-easterner as the next President of the nation to douse the tension of marginalization of the Igbos.

The proposed peaceful 5 million+ march is another conscious opportunity to sensitive Nigerians across board of the reasons why Peter Obi is the ideal leader for the country at the point of our national life, and adequate security measures have been put in place for the safety of the supports and Lagosians at large.