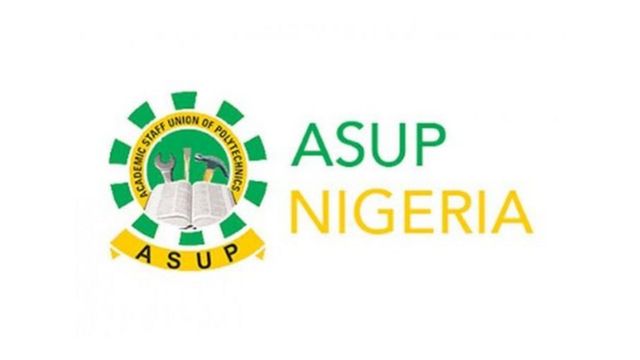 JUST IN: #ASUP Gives Strong Warning To FG—-The Academic Staff Union of Polytechnics (ASUP), has given the Federal Government a two-week ultimatum to resolve outstanding demands reached with them in order to avert disruptions in the academic calendar.

ASUP President, Mr Anderson Ezeibe, made this disclosure while addressing newsmen at the end of an emergency National Executive Council (NEC) meeting of the union, to review government’s response to its ultimatum on Wednesday, in Abuja.

Newsmen reports that the union had, on April 1, issued the Federal Government a one-month ultimatum that expired on May, 4, to address their demands.

“Following exhaustive deliberations on the update, the emergency meeting of the Union’s National Executive Council has resolved that members should withdraw their services in a two-week industrial action with effect from May, 16.

“We appeal to members of the public to prevail on the government to do the needful within the two weeks so as to avoid an indefinite shut down of the sector,” he said.

ASUP president said that among the issues in contention are the alleged non-release of the approved revitalisation fund for the sector, totaling N15 billion yet to be released 11 months after approval by President. Muhammad Buhari.

Ezeibe said that other demands included the non-release of arrears of the new minimum wage: especially the 10 months arrears for the Polytechnics.

He said that yet-to-be-released is also the reviewed normative instruments for institution/management and programmes accreditation.

”The document is currently awaiting approval of the Management of the National Board for Technical Education (NBTE). This document is expected to provide a framework to address non-payment of salaries in state-owned institutions.

”Also, there is the non-compliance with approved retirement age, non-deployment of approved salary structures, poor governance structure as well as other issues affecting standards, particularly in state-owned polytechnics.

“Consequent upon this, our members in Abia, Ogun, Edo, Benue, Bayelsa, Bauchi, Plateau and Osun states are owed salaries, while they also continue to suffer from different levels of deprivation, including non-release of promotions, among others,” he said.

He further said such deprivations are also evident in Adamawa, Niger, Sokoto and Delta states where the government has resolved to disrupt the hitherto timely payment of salaries with a subvention styled funding regime.

”Other outstanding demands yet to be met by government include infractions in implementation of the provisions of the Federal Polytechnics Act, as amended in 2019 and observed delay in the appointment of rectors among others,“ he said.

The ASUP President, however, called on the Federal Government to do the needful, while also urging them not to continue to feign ignorance to the demands of polytechnic workers