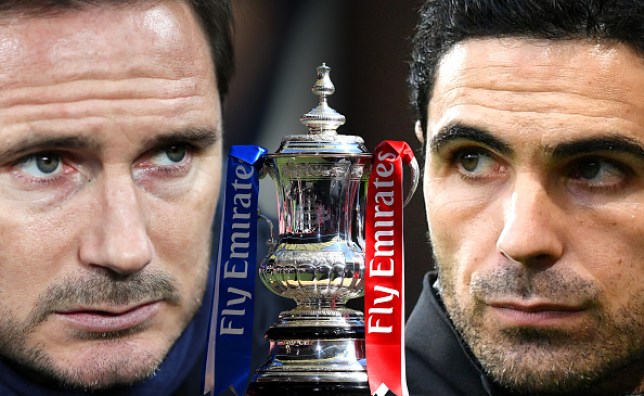 #FACupFinal: Mikel Arteta And Frank Lampard Go For First Trophy At Wembley – #CHEARS–Arsenal and Chelsea will contest Saturday’s FA Cup final at Wembley – led out by two of the new generation of managers.

Gunners’ boss Mikel Arteta, who will be 38 years 128 days on the day of the final, and Chelsea counterpart Frank Lampard, at 42 years 42 days, are the two youngest Premier League bosses.

And both have a major trophy in their sights at the end of the first season at their respective clubs, in the surreal surroundings of the first behind-closed-doors FA Cup final.

Impressive game management and intelligence has already characterised both men.

Both have shown the tactical flexibility and swift learning to even outmanoeuvre their mentors and two managerial masters this season.

Arteta learned from a heavy 3-0 loss at Manchester City to turn the tables on Pep Guardiola, the manager he left behind to take over at Arsenal in December, to reach Saturday’s showpiece with an outstanding 2-0 win at Wembley.

Arsenal’s two landmark performances under Arteta have been victories inside four days against Premier League champions Liverpool and then the FA Cup semi-final triumph.

They were wins based on qualities Arsenal’s critics have always accused them of lacking – grit, character and a fearless they-shall-not pass defensive resilience. They were fully committed for their manager.

Arsenal had 31% possession against Liverpool and 35% against Manchester City.

Liverpool are regarded as the benchmark for work-rate and immense physical commitment and yet Arteta’s side out-ran them 112.1km to 108.1km.

#BBNaijalockdown: ”Laycon Does Not Want You” – #BBNaija Kiddwaya Tells Erica

BREAKING: Heavy Tension As Another Contagious Virus Breaks Out In China