Men of the Abuja police command have reportedly arrested Chukwukelu Adumah, pictured above, for allegedly defiling two of his children, a four month old and his one year old son.

Activist, Harrison Gwamnishu, who shared the story online, said Chukwukelu is currently being detained at the Nyanya Divisional police station.

In 2018, Lagos Nigeria, Chukwukelu Adumah was arrested and released by the police for raping 13-year old neighbours daughter. After the incident, he relocated to Abuja.

If you reside in Abuja, we need to lend your voice on this current case.

You can’t keep silent in such cases as Paedophiles are nearby. Don’t be the next victim. Join us #FightAgainstPaedophile.

Efficient Grace Ume is following up and we want you to join her as we are currently receiving threat to withdraw from seeking justice. 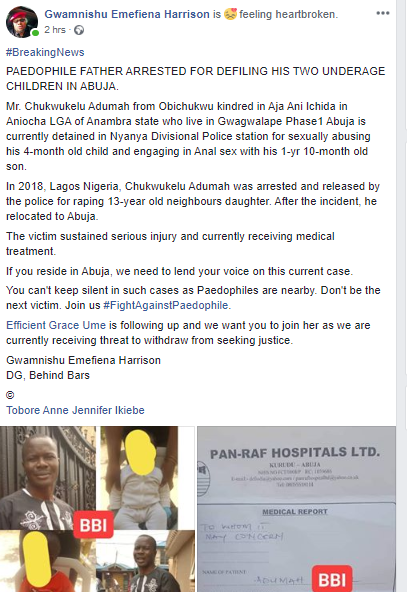 President Buhari Commends Governor Obaseki On His Victory Over APC

How Governor Fayemi Reacted After He Was Suspended From APC

BREAKING: Obaseki Says He Has No Plans To Return To APC Now